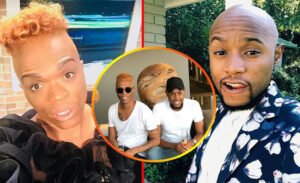 Trouble in paradise for Somizi and Mohale

It have been so clear that there is fire on the mountain here in some blazing relationships in SA. Divorces and breakups are nothing new where celebrities are concerned. Trouble in paradise for Somizi and Mohale

VERY HOT: Somizi needs bank statements before he goes on a date

First, they are happily in love and eager to let the world know it. Some celebs, like Tom Cruise, share the good news in the most goofy albeit memorable way. In his case, it was by jumping up and down on Oprah Winfrey’s couch.

Of course, the trendy thing to do these days is make it “Instagram official”.

Once given the stamp of approval on the social media platform, the bombardment of affectionate pictures follow. It’s either a cute photo at home, something playful or somewhere idyllic where the couple are serving up goals that make us green with envy.

This can go on for weeks, months or even years until they decide to either tie the knot, go the mature route of consciously uncoupling, à la Gwyneth Paltrow and Chris Martin, or allow things to get real nasty, like Rihanna and Chris Brown or Black Coffee and Enhle Mbali Mlotshwa.

The point is, if you share your happy moments at the drop of a hat, why hide the truth when the relationship goes south?

Several weeks back, news of Jennifer Lopez and Alex Rodriguez splitting broke. Shortly after, it was denied only for it to be confirmed few days ago.

Don’t think about lecturing me on celebrities being entitled to their privacy. That’s only applicable to those who make painstaking efforts to ensure a low-key private life.

This brings me to Somizi Mhlongo-Motaung and Mohale Motaung-Mhlongo. Why are they torturing Mzansi by keeping mum on the divorce rumours?

Fans celebrated the couple since they started dating in late 2017. Yes, there were and still are detractors. In fact, many felt Mohale was a gold-digger. Given the 22-year age gap between the couple, the reservations were understandable.

At the time, Somizi was quick to dismiss the allegations and pushed the true love narrative.

When the couple walked down the aisle in a lavish ceremony in 2019, the hate appeared to subside. More so, after Showmax, in bagging the exclusive rights to Somizi and Mohale: The Union, screened the series.

Then came the honeymoon phase, which included tons of travel pictures. Somizi also loved cooking up a storm and having his taster close by.

Heck, they even shared the screen on 1Magic’s Dinner at Somizi’s.

Up until that new cheating scandal in August, they have been lovey-dovey. Was it the straw that broke the camel’s back? It could very well have been.

These days, Somizi is living it up with his bestie, Vusi Nova.

Mohale, who has removed his hubby’s surname on his social media accounts, is keeping his hustle alive while also busying himself with several social causes.

Both have responded separately to divorce rumours. However, they appear to be doing a clever PR dance around it.

With Somizi unfollowing his spouse shortly after Easter, the writing does seem to be on the wall that there’s trouble in paradise.

Hopefully, we won’t be left in limbo for much longer.

Trouble in paradise for Somizi and Mohale