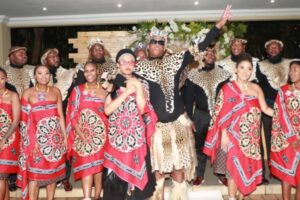 VERY HOT: Trouble in paradise for Somizi and Mohale

The two had social media buzzing with comments, pictures and videos of their special day being posted by their friends and family who attended the wedding.

Amongst the guests who attended the wedding were DJ Tira and his wife, Gugu Khanti, actor, Khaya Dladla, Dladla Mshunqisi and DJ Bongz.

Khanti posted snippets of the wedding on her Instagram stories.

Mampintsha and Babes are getting married today?

At the wedding reception at a venue in uMhlanga, the newly weds, who were dressed in bottle green outfits, entertained their guests with a special musical performance.

Congratulatory messages poured in for the happy couple.

Another user, @IkhehlaLeChina added a spicy comment: “Yall thought it will end in tears nashweba. It ended in marriage. Yall will learn to mind your own business from today onwards. #BabeswedsMampintsha”.

Yall thought it will end in tears nashweba
It ended in marriage🤣😂
Yall will learn to mind your own business from today onwards.#BabeswedsMampintsha pic.twitter.com/Al2KcG4ifY

Mampintsha secured lobola for Babes in October last year and she made the announcement saying that lobola negotiations were done and that she is now officially a Mashimane.

There is also speculation that the couple’s wedding ceremony has been filmed for TV.