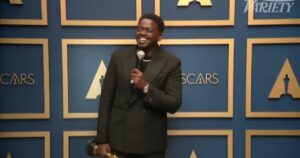 VERT HOT: Somizi needs bank statements before he goes on a date

Kaluuya won the Oscar for best-supporting actor for his portrayal of Fred Hampton in “Judas and the Black Messiah”.

Gardiner was covering the most important night in Hollywood, but her question to Kaluuya rubbed many people the wrong way.

In a clip that went viral, Gardiner initially asks the “Black Panther” star what it’s like being directed by Regina King.

However, Kaluuya didn’t star in the King directed movie “One Night In Miami”, which was “Hamilton” actor Leslie Odom Jr. who was nominated in the same category as Kaluuya.

After the actor asked her to repeat the question following what seemed to be “did that just happen“ reaction from Kaluuya, Gardiner rephrased her question, asking, ”I was wondering what it meant for you to win with the world at the state that’s it’s in at the moment”.

To which Kaluuya answered, “It’s amazing to have this honour and be appreciated in this way“.

Daniel Kaluuya responds to a journalist who mistook him for Leslie Odom Jr. at the #Oscars  and asked him: “What was it like being directed by Regina [King]?”

Following this, Gardiner received backlash since many people claimed that she mixed up Odom Jr. with Kaluuya which is not the first time black actors have been mixed up by someone.

You’ve been following him throughout his career, but you don’t know which movie this man played in? Get out pls. https://t.co/xkg2MPTUN2

Live interviews are hard.
But they're not this hard.
The level of disrespect in his moment of glory…
And the abstract laziness of the question itself…
All of it is just tiresome and enraging. https://t.co/5dvb9Nppqy

One thing white South Africans will do is embarrass us 😭 https://t.co/7QtcxStD5M

This is what I’m talking about.

The fact that she also specifically said she’d been “following him since the beginning” and STILL mistook him for Leslie is a whole ass problem.

Taking to Twitter, the Hollywood Foreign Press Association (HFPA) member posted: “#DanielKaluuya I did not mistake you for Leslie Odom jr. I’m sorry if it seemed that way. I had wanted to ask about Regina King not being nominated as a director for ’One Night in Miami’, and your win for ’Judas and the Black Messiah’ for the community at this time.”

She said: “There was a sound issue so I dropped the part about Regina King and restated my question. What does it mean for the community at this time? When I listened to the audio, I do understand, but there was no confusion.”