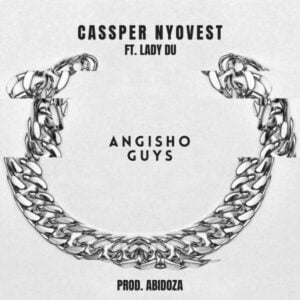 The prestigious SA big daddy, rapper, singer and songwriter Cassper Nyovest who have been considered by many as the most successful SA music artist is here today as he drops the full original mix song of his highly anticipated 2021 amapiano song titled Angisho Guys where he featured Lady Du and produced by Abidoza. Cop below and enjoy. Cassper Nyovest Angisho Guys ft. Lady Du mp3 download

“Angisho Guys” have been one of the most demanded locked tune and have been trending on almost all music charts even when it was unreleased. The spike came after the track was played by Mr JazziQ on his balcony mix alongside the twin DJs Major League, and since then the track have been something else, with lots of fans attributing it to the duo that performed the set, but today we decides to dish out the full original mix to perfect the weekend. So without added ado, update your playlist and leave a feedback with us using the comment box below.

Cassper Nyovest whose real name is Refiloe Maele Phoolo as many already know is not a small fish to fry when it comes to music in the country, in fact he’s currently regarded as one of the most successful music artist in the country with countless hit tracks, many of which are hip hop which we already knew him with, not until the divergence of DJ Maphorisa, thus dragging the Mafusa to feel the piano vibes, and till date he’s been doing well. Some of the tracks he has contributed to are “Bambelela“, Ho Monate, Siya Trenda and many more, and today he decides to even perfect his name more with this astonishing amapiano banger Angisho Guys alongside Lady Du.

Lady Du on the other hand have been exceptional lately and everything she touches simply turns gold and this one isn’t different as fans have been clamoring into giving her the title as amapiano queen, and connecting with the legendary Mufasa Cassper Nyovest on Angisho Guys will indeed the spotlight she have been waiting for.

Stream, and share “Angisho Guys”. Don’t forget to drop your comments below.