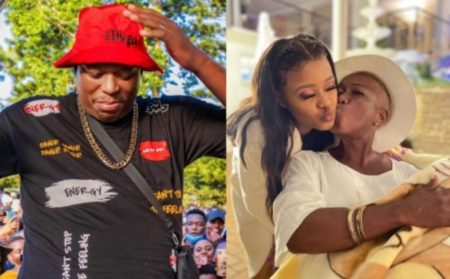 Zama’s death follows the passing of her son, Mandla Mampintsha Maphumlo. Mandla died on the 24th of December after suffering a stroke.

The singer’s sister Pinky Gumede revealed that their mother couldn’t accept Mampintsha’s death as she frequently asked of him.

She further sought for financial help as Zama’s health deteriorated after the musician’s death.

“I am even scared to ask them for help. It is costing me more than R140 to travel to the hospital every day to see uMa and I am running out of funds. I heard that the Simelane family knows that she is in hospital, but I am afraid of being the one that calls them and be as though I am harassing them. I don’t know what we have done to them. We are not greedy people; I just want her to be okay so she can deal with her son’s death,” Pinky added.

Social media users have taken to social media to send condolences to the Maphumlo family.